The chef at the Blurring Shock cafe is all out of pie but has cooked up another tasty treat. This time it's damage bars (may contains nuts).

Following my look at the damage I received in game by damage type (i.e. Spirit, Physical, etc) I have now looked at the damage done to me by each class.

My reason for doing this is to make me more survivable in RvR, and to make me a better tank. One of my favourite things about WAR is the wealth of different stats available to the player, offensive and defensive. With such variety it isn't always easy knowing which stats are the best - hence a closer look at the numbers.

I can't easily determine who auto-attacked me. In the combat logs there are lots of hits simply described as 'attack'. I could go through it by hand and figure each one out but it's a ball-ache so I'm not going to. In the data below auto attacks from all classes are listed together as 'All auto-attack' and, as far as I know, all auto-attacks do physical damage only.

The results are before any mitigation from armour or resists. I play a Swordmaster on Karak Norn and as was pointed out last time the type of damage received will depend on who attacks me. As a tank I am naturally in the firing line. 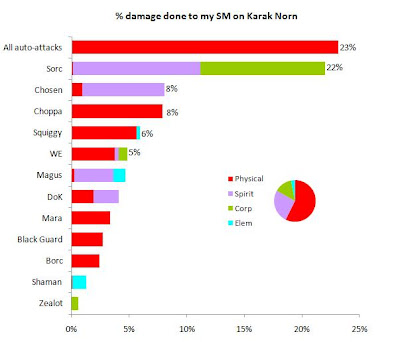 This doesn't mean that a Chosen and a Choppa do the same damage, but that these classes did the same damage to me over a couple hours gameplay. I can't tell how many Chosen or Choppas there were out there. One would assume that there were more Chosen. Remember too that these values are before mitigation so Chosen would've done more actual damage to me than Choppas as my spirit resist (40%) is lower than my physical (75%)

Conclusion: Can't Ignore the Sorc
There is a lot more to PvP than total damage. Burst damage might not amount to much in total but it puts prssure on healing and kills. In my search for a better defense however, I can't ignore the amount of damage done to me by the Sorc. +Block and +Disrupt and good Spirit and Corp resists will be important.

There is more work to be done! Next week I am going to have a look my avoidance stats (Block/Parry/Dodge/Disrupt) as well as how much damage I take from Casters vs. Melee vs. Ranged.

I'll need to look at individual high-damage abilities at some point soon too.