A Wink and A Smile

I have not played much of 1.4.3's Live Event yet. Didn't get the eldest to bed 'til almost 11 last night so was knackered and just inhaled vapours from an empty beer bottle and vegged my way through a couple of Scs. What little I saw of the College of Corruption I couldn't make sense of, just got farmed on the stairs.

I logged off quite down actually. I shouldn't bother logging in so late, just to catch a lock and PuG a scenario or two. Leeching locks used to be worthwhile when I was RR50 and shit, as you could get about 10% renown for it, but not so anymore.

Soloing Scs rarely turns out for the best at that hour either. In Gates of Ekrund last night the only DPS in the group, a WH, stealths up and goes missing, wants to be the man I guess. One of the healers turns out to be DPS. I actually had some fun though. Switched to my WB spec,a nd with Odjira, Quick Escape, and full defensive setup I gave the Des a good run around. Got 0 renown though.

My overall thoughts on patch 1.4.3 are that is of very little consequence to me, or the game. WAR's events aren't really events as I imagine them to be. Nothing actually happens. It's just an extra scenario with some progress/reward attached. My WAR is oRvR, not Squishies of Asqy or whatever they are called. When will they do a Live Event that actually takes place in the live world, in the lakes? They could try some new campaign ideas or something, wandering monsters, special RvR quests into the side zones to rescue supplies or something. Something!

Despite the little grumble up there I am content with the game as it is, plenty of fun to be had. Can't get enough of it in fact. It's not exactly what I want it to be, but it what it is, you know. Yadda yadda yadda. WAR has a lot to offer me when I am fully awake and there is beer in the bottle.

But what's this 6th June schizzle? I have learnt not to get carried away with my hopes and expectations for WAR but if Bootae deems it appropriate to devote a wink and a smile to it then it might be something up my street. I'll wager it's not more vanity pets. My guess is it's a joint sub for DAoC and WAR, perhaps with a levelling bonus to get people going. This is a guess. I hope it's wrong.
Posted by @shots_on_target at 04:50 1 comment:

The Battle for Thargrim's Headwall 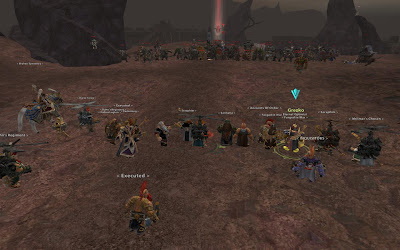 I took part in Grezko's event on Thursday gone. It was a Dwarf vs. Orc & Gobbo only battle in Black Crag. It was a hoot, despite loads of elves turning up. Screenshot here is us Dawi lined up ready to take on the stinkin' greenskins.

I miss this sort of thing from the game. For me this event brought Warhammer to WAR, if you know what I mean.
Posted by @shots_on_target at 10:01 3 comments: