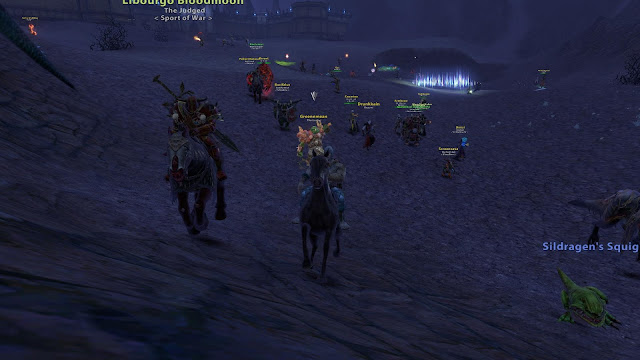 More action from Return of Reckoning / Warhammer Online! This is me running away from a failed keep siege in Chaos Wastes. I am only L16 and it was my first taste of the now merged Tier 4. In order to ensure a healthy population the merged T4 includes ranks 16-40 and covers the T2, T3 and T4 zones (only a few open at any time). I only joined late on and just as the keep siege fell apart and Order poured out to sweep up the mess, I was well out my depth to be honest. Still on my starter mule and in T1 gear! Lots of fun though.

Back Playing WAR / Return to Reckoning 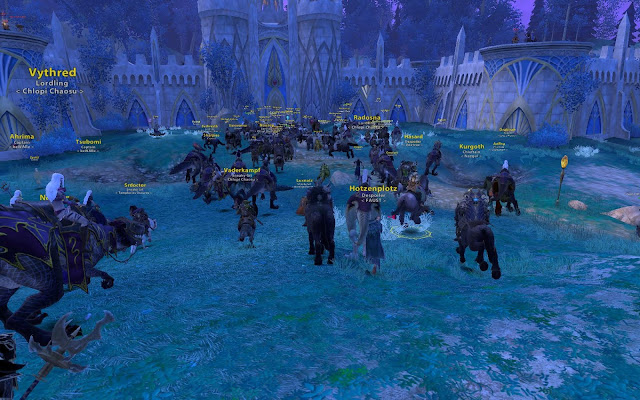 Yes, it's true! I am back playing Warhammer Online over on the excellent "Return of Reckoning" private server.

Quick post to say hello with an old screenshot from ROR i had from last year.. I am still just in T1 at the moment though and getting a feel for things again, plus trying out come classes I never played much before.

The game has a full download client now, plus it's own launcher, so there's plenty of effort been put in over the last year or son to continually tweak and improve the game, plus more good stuff coming soon I hear Forts will get implemented in a couple of weeks. Join Us!
Posted by @shots_on_target at 16:04 No comments:

From Mace to Face...

I've recoverd this from the Way Back Machine and am posting for posterity and reference..... it's not by me but by I guy called Rok. It's how damage in WAR was calculated, in 2009 at least. I am going to make an online calculator and will use this as reference.

Meet Tanky
Meet Tanky. Tanky doesn’t like to be hit with things and protects himself as much as possible. Let’s see what happens when we attack him.

Step 1: Did Tanky Block?
Tanky likes to carry around a shield that he tries to put between himself and harm’s way. If he manages to do so he Blocks and the attack is stopped. This shield has a Block Rating and the higher it is the better his chance to Block. However the stronger the attack the lower Tanky’s chance to block. If you’re attacking with a melee weapon, spell or ranged weapon you will be using your Strength, Intelligence or Ballistic Skill respectively to overcome the shields Block Rating. Any other bonuses or penalties are added after that’s worked out, for example some gear helps you block better and two-handed melee attacks reduce Tanky's chance to Block by 10%.

Step 2: Did Tanky Parry/Dodge/Disrupt?
Tanky’s a clever fellow and has discovered that he can avoid getting hurt be getting out of the way of things. He’s learned to deflect melee attacks with his weapon (Parry) which comes from his Weapon Skill, jump out of the way of arrows (Dodge, sometimes called Evade) thanks to Initiative and shrug off magical attacks (Disrupt) due to his Willpower. If he manages to do this, the attack is stopped. As with Blocking, Tank’s chance to Parry, Dodge or Disrupt is reduced by your Strength, Ballistic Skill or Intelligence. Any other bonuses or penalties are added after that’s worked out, for example dual-weilding would give Tanky a 10% bonus to Parry and two-handed melee attacks reduce Tanky's chance to Parry by 10%.

Step 3: What did you hit with?
If you’ve come this far then you’ve hit Tanky! How much damage you’re going to do depends on what you hit him with. Your attack has an initial damage shown on its tooltip. It will also do additional damage if you’re attacking with a Ranged or Melee weapon based on that Weapons DPS. Each attack has a unique coefficient for your weapons damage bonus, and while it is often the same as the cast time of the attack (or 1.5 for instant casts) this is not always the case. The Weapons DPS is increased by this coefficient.
Sometimes you’ll just be attacking automatically with your weapon, this is called auto-attack. Auto-attack has no tooltip damage and its coefficient is always your weapons speed.

Step 4: So you’ve got two weapons hu?
So you thought you were clever did you, bring two swords to a knife fight? Well if you’ve attacked Tanky with an ability both weapons will add damage, however the off-hand weapon won’t add as much.

Step 5: How hard did you hit?
Tanky is Tough but you’re no slouch either. If you’re stronger, smarter or a better shot than Tanky is tough you’re going to do extra damage…but if he’s tougher then you’re going to do less damage. Luckily, no matter how tough Tanky is your attack’s Base Damage can’t be reduced below half by that toughness. So this time it’s your Strength (for melee), Intelligence (for spells) and Ballistic Skill (for ranged weapons) reduced by Toughness. You can also get bonus melee, magic or ranged damage on some items. These bonuses are all modified by the abilities stat coefficient which, like the attacks weapon coefficient is often the same as the cast time but with many exceptions. Again, auto-attack damage uses the weapons speed as it’s stat coefficient.

Step 6: How about % bonuses?
The damage you deal to Tanky is sometimes affected by % modifiers. Maybe someone is Guarding Tanky (-50%) or maybe you have a tactic like Divine Fury (+25%). These bonuses always add together before being applied.

Step 7: Did you hit him where it hurts?
Sometimes when you attack Tanky you will hit him where it really hurts, which means you’ll do around half again more damage. This is called a crit. Your chance to crit Tanky is based on his Initiative. The more he has the less chance you have of critting. You can also get crit bonuses that add on top of that chance and he can get -crit to counter you.

Step 8: How much more did that crit hurt?
Ooomf! Right in the jibblies!
If you’ve crit Tanky you’re going to do more damage. The exact amount is randomised between 40% and 60% extra damage so we like to average it out to 50%. You can also get bonuses that increase your crit damage. These are added on top of that 50%.

Step 9: Hang on, what’s this bubble about?
A sneaky goblin has put a bubble around Tanky and now you can’t hurt him! Luckily the bubble can only take so much, prick it enough and it will pop so keep attacking.
Damage absorb spells like this can only absorb a flat amount of damage which is listed on the tooltip. After this they are used up.

Step 10: What about all that stuff he’s wearing?
You hit Tanky and hit him good! Unfortunately he’s wearing slabs of metal from a military scrap yard. Clang!
Tanky has Armor and Resistances and they reduce the damage you do by a percentage. Armor stops physical attacks while Resistance stops magical attacks. There are three kinds of resistance: Spirit, Elemental and Corporeal. If your ability is one of these three it will say which kind on the tooltip, otherwise it’s a physical attack.
If you’re attacking with a physical attack your Weapon Skill lets you find the weak points in Tanky’s armor, this is called Armor Penetration. Tanky can also get bonuses that reduce your armor penetration. If you’re casting a spell on Tanky there is no stat to reduce his resistances. Neither Armor or Resistance can go above 75% (after all modifiers are applied) and both can be reduced by certain spells and effects. Resistances are further soft capped: After 40% they are less effective per point of resistance.

Step 11: Take that Tanky!
You did it! Tanky’s health bar is reduced by the damage you dealt. Lucky for Tanky he’s got plenty of health due to his high wounds.

So there you have it, easy as that
Posted by @shots_on_target at 07:20 No comments:

Warhammer Online: It's Back

Have you played WAR lately? I have. There's a private server called Return of Reckoning and despite being limited to Tier 1 and some bugs and stuff the PvP/RvR is alive and well. I hope to post more soon but here's a quick screenshot of me in game now cheering away :) If you happen to be playing already then please give me a shout. 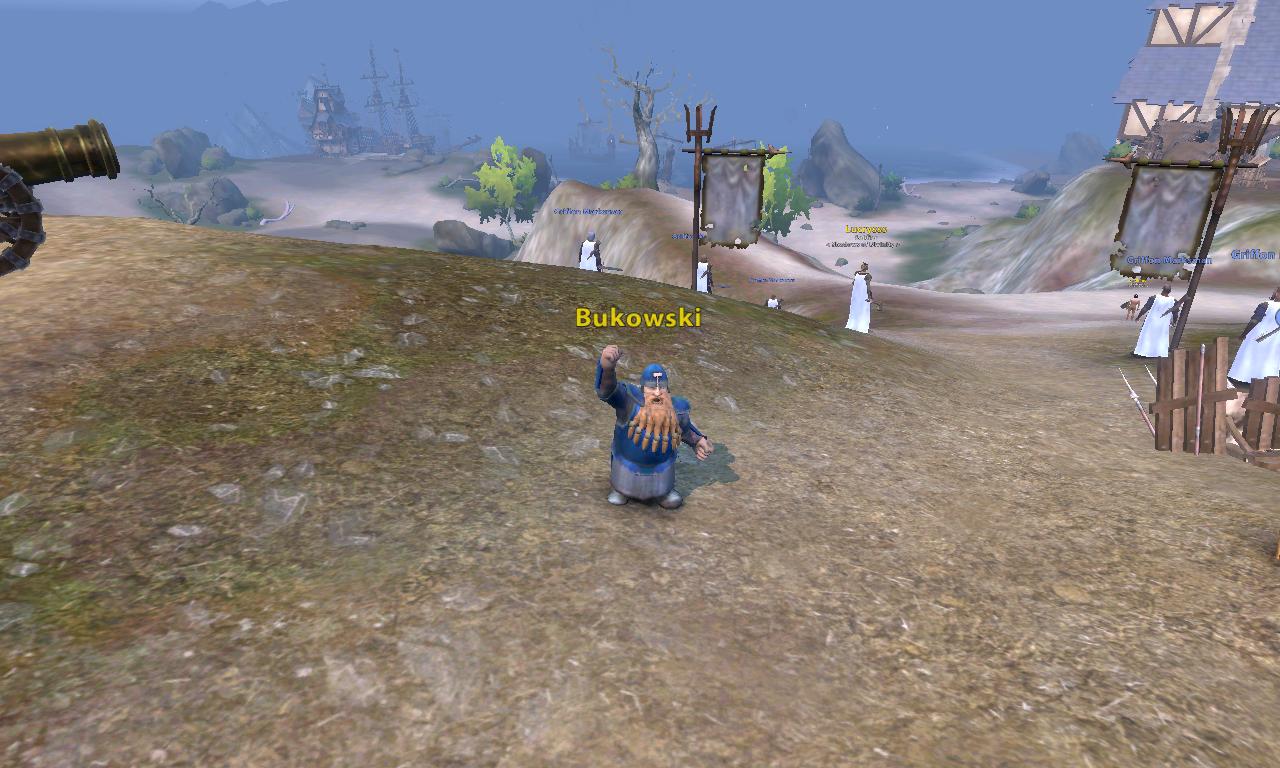 Had a bit of time to play WAR last night. No one was grouped up or even talking in /guild (HELLo!) so I hit the scenario solo queue. Bad news. 4 Scs played, 3 camps against, one camp for. Sure, I should find a better group, yadda, yadda, yawn.

After the Scs I took to the RvR lakes looking for a group or to tag along on some action. No joy. Logged off.

The sourest taste in my mouth was that I basically achieved nothing in 90 mins. A handful of crests and a few thousand RP. MY renown was 79.48% when I logged in and 79.48% when I logged out. With limited playtime I am unable to hang around for zone locks and cities where big chunks of renown are to be had, and without my old guild's organised WB nights I am unable get into the large roaming battles which really get the blood flowing.

Here is my pledge - no more scenarios, just open RvR. If I wanted to play instanced PvP I would go play SWTOR and their Warzones, whose objective based setup I like better than WAR's inevitable deathmatch spawncamps. If I can't find some fun in WARS's open world RvR then it's time to finally admit the game is up.
Posted by @shots_on_target at 08:49 No comments:

Trying to get into WAR these last few weeks, it's been a bit hard, couple main reasons...


The scenario imbalance is bad, really bad - I swear 9 out of 10 scs end up in a spawn camp, and very quickly at that. Sometimes zero kills for both sids as one side sees who the opposition is and never leave camp. It in no way amounts to fun.

This would be solo-queue by the way, which leads my other point and some could argue reason for the first. My guild is empty, gone, dead, and I have few friends left. I have joined a new guild but grouping so far has been limited and it seems a bit cliquey.

I'm gonna need to stick at and make something of it myself I think, try and find some oRvR action, or call it quits for good. Whilst playing SWTOR was fun for a bit I have missed Warhammer a lot. Missed Altdorf, missed my horse, missed the Dessies, missed sieges and keeps. Missed the world. I've not had that much time to play yet so will give it another go.
Posted by @shots_on_target at 09:13 1 comment:

I'm back playing Warhammer Online. Thank fuck for that. See you soon x
Posted by @shots_on_target at 13:30 No comments: