I chose Disrupt specifically because as far as I know the chance to Disrupt does not depend on your positioning, unlike Parry and Block which only defend from the front. You can Disrupt an attack whether it hits you in the front or back so it makes a very good test case for working out how much your enemy's offensive stats will reduce your defensive stats.

Last time I tested a build that had 18% Parry and 18 % Disrupt (0% Block) and my conclusions were mixed. My Disrupt rate was reduced by 12% from 18% to just 6%.
I have now tested some different amounts of Disrupt and Parry.

The value on the left is what was shown on my character screen, on the right the amount actually avoided from looking at my combat log over 1000s of hits. 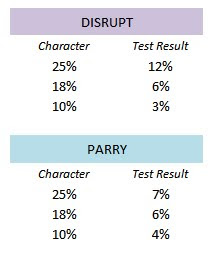 The results for 18% and 25% Disrupt show that a 12-13% reduction can more or less be considered as the typical reduction to your defense, so whatever your character screen says take 12% off that. Some opponents will reduce that more, some less. I know I have access to two tactics as a Swordmaster that can reduce my opponent's chance to defend by 10% each. I'm not familiar with Caster tactics but I have seen high level set bonuses and glyphs each with 4% chance to disrupt on them so I would not be surprised to see people reducing my defense as much as 20%. Then there are the "Undefendable" proc items.

The testing of 10% Disrupt and 10% Parry also shows that there seems to be a minimum amount to which your defense can be reduced. I think this might be based on your actual stat and disregard the modifiers.

There's are some equations out there for working this stuff out...

So I'm guessing that your chance to disrupt or parry can't fall below the first bit of the equation: (defenders willpower / attackers intelligence) * 15

A Closer Look at Parry
Parry isn't as straight forward as Disrupt due to the positional considerations and that both high and low Str people will be hitting me so I don't want to over analyse it. But (But!) looking closer at the attacks parried against certain classes when I had a 18% base chance, I parried around 10% attacks from Black Orcs compared to only 2% from Witch Elves.

It's also important to note that an attack will actually give your enemy a Parry bonus if they have higher Weapon Skill than your Strength. So a Black Guard with 500 STR attacking a Slayer with 700 WS will actually give the Slayer a 21% chance to Parry before any modifiers.

I had really wanted to find that avoidance and Disrupt in particular were worthwhile investments. There is a lot of guff on forums about avoidance being "completely useless" and if I'm honest wanted to do some testing and prove this wrong. I believe people often latch on to a popular idea and it becomes accepted as the "truth" without the facts actually being looked at.

But from these latest results I now think avoidance isn't something you can count on as a reliable defense UNLESS you can get you're actual in-game avoid chance something like 50%.

The positional requirements of Parry and Block also make me question the merit of these. In a 6v6 I can imagine positioning would be easy to keep up but when you start getting 12v12 (e.g. scenarios) you often get mobbed and attacked from all sides and Block/Parry won't make much difference. Them Witch Elves just love to get behind you! And I notice that I'm getting AoE attacks from Choppas from all directions!

I still think Disrupt has some hidden value due to the potential to avoid large spike damage from Sorcs, especially for the ever popular 2H Tank . If I could stack up my base Disrupt chance towards 40-50% I would. At the moment I sacrifice too much to get there but Warlord has a +5% Disrupt set bonus that I'll be interested in when I reach that level.

The Swordmaster does have access to a few abilities to increase Disrupt. Aerythic Armour is +5% and Calming Winds tactic gives +10% in Improved Balance and +20% in Perfect Balance. Plus Hold the Line or Wall of Darting Steel are channelled abilities granting +45%/+50% Disrupt. With these I can get my Disrupt to +95%/100% and I notice this is very, very effective. It Disrupts a lot!!

I am still interested in doing more testing of avoidance. I will try out some of the Swordmaster's Disrupt tactics mentioned above and I will try a maximum avoidance build too (e.g. shield + tactics).

But I am also soon to be taking a look at initative and reducing your chance to be crit. I think this may be the answer I'm looking for. Stay with me ;)