This is a look at the abilites which do the most damage per hit on my Karak Norn Swordmaster. From my combat logs I have totalled up the damage done by each ability and then divided this by the number of times the ability actually hit me.

The numbers are before any mitigation from Toughness, Armour or Resists to give them more relevane to all classes, rather than slanting the numbers with my high tanky mititgation.

I've only included abilities which hit me more than 20 times (out of 2000 total hits). There are certain abilities, such as Morales, which hit hard but they might only have hit me once or twice so I'm not counting them as typical. 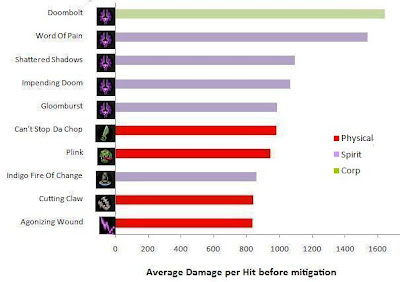 Remeber this is average damage per hit and before any mitigation. It's an average of all normal and all critical hits together and this can smooth over the potential actual damage some of these abilities can do.

For example, from my logs I can see Agonizing Wounds can crit for ~1500 (before mitigation) and, as it ignores armour if struck from behind, I will often take ~1000 actual damage from an Agonizing Wounds crit.

Saying that though, Sorc crits regularily do me for closer to 2000 actual damage. I mitigate about 50-60% of Sorc damage meaning the total hit before mitigation would be scarily around 4000. I dread to think what this would do to a low toughness class with debuffed Spirit resistance.

Conclusions: Ouch and Double Ouch
As I've been posting my other results and seeing the Sorcs taking the damage biscuit I've been mindful that a lot of this damage could be so called "meaningless damage", AoE or DoTs, that are easily healed away, and it's the burst abilites that get the real job done.

The results show that Sorcs has the potential to inflict more single big hits on me as well as most overall damage. I have to stop them somehow, for the greater good.

I have been tailoring my spec a bit for greater survivability vs. Sorcs. and it has worked out well, but I had been holding some back until now as I was fearful of losing to much to melee classes, particularily the Choppa and Witch Elves.

Swordmaster's were initially portrayed by Mythic as the "anti-magic Tank" and there are a few useful abilities for this which are often ignored on the SM forums.

I am going to explore further a Sorc-Killing role for my SM.
Posted by @shots_on_target at 04:10