Some very valuable feedback in the comments from my last post has spurred me into further analysis.

My results last time showed that those folks with RR90 scenario weapons scored a disproportionate number of killblows for their rank and my hasty conclusion was that this is proof of the power gap.

The feedback I got was... did I consider that the very same people who are RR90 are also the most skilled and experienced players and therefore dominate regardless of gear.

I did think about this angle whilst putting those last numbers together but I can be blamed of making the common statistical mistake of confusing correlation with causation. Here's an example of what I mean copied from t'internet:

In this example, there is a clear lurking variable, namely, age. As the child gets older, both their shoe size and reading ability increase."

The omitted lurking variable in my case is player skill.

So, accepting the assumption that the most skilled of players will always dominate, has the new gear in 1.4 made the best players dominate even more? Do these players kill more whilst dying less?

Cconveniently I have a combat log saved from May 2010, 9 months ago. I am using the ratio of kill blows : Deaths as my measure and this obviously "rates" DPS classes above Tanks & Healers.

Below is a table showing the top 20 players ranked by KB:Death ratio from one night in May 2010 compared to one night in Feb 2011 on Karak Norn. 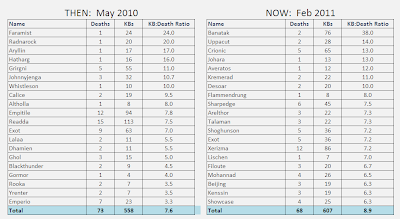 As can be seen the "best" players, or those in the best groups, were just as dominant on that night back in May as they are on the night in Feb. Extending this to the top 50 rather than top 20 gives an average of 6 KB:Death now compared to 5 KB:Death in 2010.
This analysis suggests that the top players are running amok but only to the same degree as they were 9 months ago. Statisitically the two data sets are very similar. There is not an overwhelming power shift.

Of course these very skilled players will dominatae over low RR players even more in their new gear than they did 9 months ago and I can understand more and more why Mythic's repsonse to the power gap has been to adjust the lower level armour sets.

Feedback is extremely useful and warmly received :) Sorry for the error (see edit)

EDIT: First time up this post detailed a slightly better KB:Death ratio in May 2010 than nowadays. I forget to fully calculate some of the numbers. New results suggest KB:Death ratio is slightly better now than then but the two data sets are very similar. My conclsion is the same h, I think, that skill does prevail over gear, but I will take some extra time to mull this over. Please draw your own conclusions :)