I'm going to get myself all in a lather over the next few weeks with ideas for improving the RvR in WAR. I'm also going to try and scour other WAR blogs and forums for great ideas and collect them together, with proper kudos attributed of course.

My first idea is just a small thing and won't affect the overall campaign but it'll be a lot of fun and bring some epic moments.

It's giving the players the option to play as Warhammer Monsters! One of the great things about fantasy is the monsters. Ogres, Trolls, Giants, all that jazz. Take a look at these bad boys. 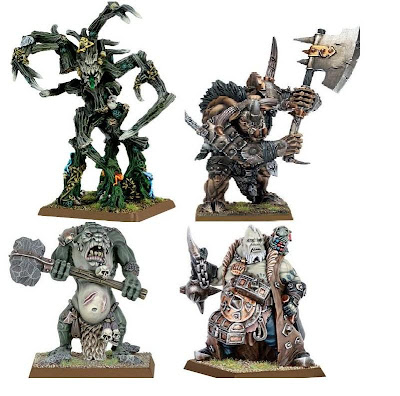 The introduction of Player-Champions to the new City Siege has been a big hit and Player-Monsters is really building on that. I actually had this idea in March - shoulda posted that shit.

The nitty gritty details don't matter here but basically a player would collect some kind of currency, be that Invader Crests or new Monster Tokens, and then trade these in at a merchant to receive an item that would turn them into a montser of their choice.

The Monster-Buff would last about an hour I'd guess and have a lockout timer on it, perhaps a day. The monsters wouldn't be super-powerful, just a bit different, maybe have twice the Wounds as normal, nothing extravagent, it's really just for variety and fun.

I would try to implement 3 monsters choices for each of Order and Destruction. All monsters would be hybrid classes - they would each have ranged ability, melee, and some heals. Basic stuff, think T1 :)

To make it more interesting I would also tie a mini-progression system to the Monster-Buffs, so that whilst you are playing a Monster you earn influence or something that levels your Monster up earning you new tricks. Nothing major of course, just a few different abilities, some specialisation, or access to bigger and better weapons.


Order Monsters - not so easy to find monsters for the good guys - any ideas??
Ogre Butcher : Ths guy is big and fat and carries two giant cleavers!
Ogre LeadBelly: Carries a small hand-cannon so short-ranged RDPS is it's thing
Treeman: Treeman. Nuff said.

I think this would be a great addition to the game, not too hard to implement and would provide some epic massed monster battles!
Posted by @shots_on_target at 22:58